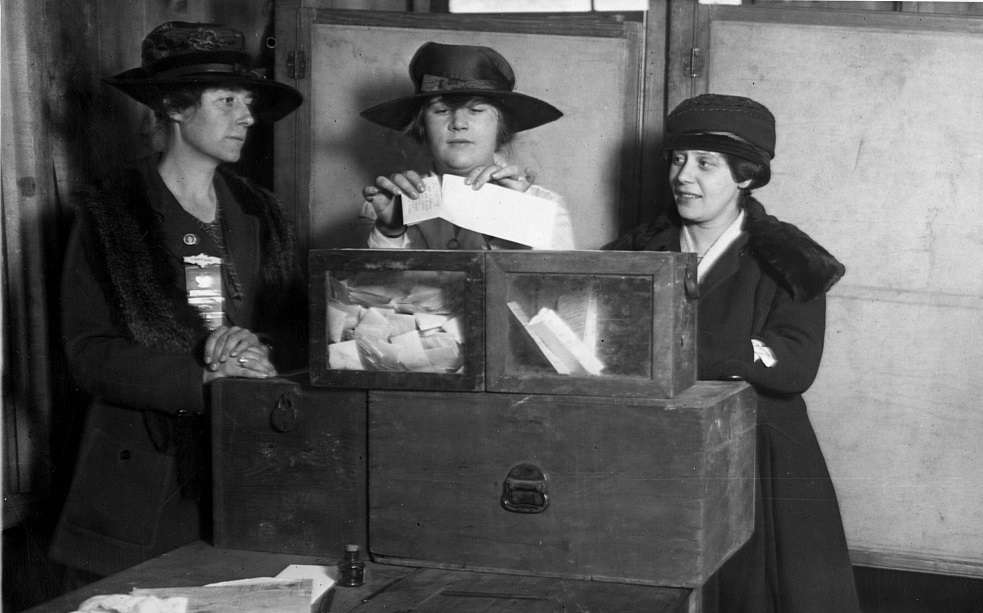 As we move closer to a historic election, we should also to look back at our voting history. Our ancestors helped shaped our country just as we are preparing to do on November 3rd. What can we find out about historic voting? And why does it matter?

Voting in the U.S. has been messy, complicated, and disappointing for most people in our history. The land of the free has a long record of working against giving everyone a voice in our democracy.

One of the most awesome benefits of genealogy is how we get to look more deeply into our history, warts and all. There are many incredible and amazing things in our past. But there are also a lot of incredibly awful things that we must reckon with. This includes the deliberate disenfranchisement of Americans across time.

The ongoing challenges presented by the lack of genuine universal suffrage also mean it can be very difficult to locate historic voter information. We must temper our expectations with the reality on the ground. That said, let’s take a look at the history and what we can hope to find!

Knowing the general history of voting rights can help us narrow down what to expect when we search for voter records. But why do we want to find them at all?

First, they can serve as another layer of potential location and family information to fill in gaps between censuses. The info can also help confirm erroneous research data. Those random names or addresses can make more sense with the registration data. And they can shed additional light on a person: Where did they live? Who did they live with? What party did they affiliate with?

A Crash Course On Voting History

Here is a quick timeline of voting in the United States. It is a sordid tale. History has many lessons.

Also, for brevity and sanity’s sake, I won’t go into each state’s history. See below for some resources!

Voting rights were determined by the individual colonies, based on British laws. These rights were restricted to white males of varying levels of wealth. Voting was only for local matters, though elections could be rowdy! Colonists (famously) did not have direct representation in Parliament.

The apple doesn’t fall far from the tree. After the Revolution, our founders make voting a states’ issue. Most of the original states keep (or quickly find their way back to) the status quo of allowing only rich white guys the vote.

The new post-Colonial states usually have a more broad definition of qualified voters, though still generally restricted only to white males. However, this is based on the reality on the ground. A majority of the early settlers of the new states and territories are not as wealthy as their coastal counterparts. Expansion is a necessity.

Check out this Google Arts & Culture Exhibit for a visual look at Colonial and early American voting. For a very in-depth look at the voting rights of the early American period by state, this article by Donald Ratcliffe is fascinating.

Leading up to the Civil War, most states begin incorporating universal white male suffrage. Exceptions are the former colonies of Massachusetts, Pennsylvania, Rhode Island, Delaware, and North Carolina. They continue to use varying form of wealth restrictions, in some cases beyond the Civil War.

From 1861 to 1865, we fight the Civil War over slavery and the associated socio-economic beliefs of the time. In 1863, slaves in Confederate states are freed by the Emancipation Proclamation. The war effectively ends in 1865 with Lee’s surrender at Appomattox (but doesn’t technically end until 1866!).

The Reconstruction Era follows the Civil War, as the country tries to rebuild. The “Reconstruction Amendments” are enacted to protect and enfranchise the newly freed slaves. Slavery is officially abolished in 1865 with the 13th Amendment. Citizenship, equal protection, and due process are covered in the 14th Amendment in 1868. And at long last, in 1870, the 15th Amendment prohibits states from preventing people from voting based on “race, color, or previous condition of servitude.”

Conversely, in the former slave states, ex-Confederate soldiers are (unevenly) disenfranchised at the state level in this period. They are, however, re-enfranchised by the end of Reconstruction, either through presidential pardon, legislative reform, or lack of enthusiasm for the laws.

In Women’s Suffrage news, Wyoming Territory elects to allow its female citizens to vote in 1870–the first territory or state to do so!

The Reconstruction Era ends with the Compromise of 1877. This opens the doors for systemic disenfranchisement of blacks, other minorities, and the poor in general. The foundations of Jim Crow laws are laid.

Women are granted the national right to vote with the adoption of the 19th Amendment. Check out this cool map to see the history of the women’s vote across the country.

Less cool is the reality that the 19th Amendment is only a partial victory for universal suffrage. Not everyone yet has the right to vote and there are still many restrictions and hurdles to voting.

The Civil Rights Movement grows, becoming an undeniable force by the early 1960s. Native Americans and Asian Americans are granted to the right vote (finally).

Landmark legislation is enacted prohibiting a poll tax as a requirement to vote in federal elections (24th Amendment) and wealth and tax payment requirements in state elections. The expansive Voting Rights Act of 1965 is put into place. So much progress! But, as always, universal suffrage is not yet achieved.

In the decades that follow, additional barriers to voting are removed. These include barriers for young adults, language minorities, the elderly and people with disabilities, military personnel abroad, and–in some places–felons who have served their sentences. There are still (often successful) attempts at disenfranchisement through gerrymandering and other grey-area activities to subvert popular vote and representation.

In Shelby County v. Holder, the Supreme Court rules that Section 4(b) of the Voting Rights Act is unconstitutional. 4(b) required states outlined in the VRA to submit any voting law changes to the U.S. Attorney General before enactment. Predictably, a number of states have a field day with this and begin creating barriers to voting for minorities and the poor.

As you see, who can vote, when, and where varies considerably by time, place, and if your ancestor is a white male. Let’s see where we can find our folks in the voting records!

First, these records are often not as easy to find as other government registries. In addition to the vagaries of voting laws, the records are not as easily available online. Some perseverance may be needed.

That said, there are a variety of ways to start hunting down these records and unlocking more of your ancestors’ stories! Here is a list to get you started.

Note: These records may not be digitized and COVID may slow down any record retrievals. Like everything else in 2020, patience is a virtue.

One Caveat: Remember that political parties and their affiliate beliefs have changed over time. A mid-19th century Republican or Democrat would not recognize their 21st century counterparts’ ideologies as their own. You’ll want to search for party info on the era your ancestor voted in.

Thank you for joining me on this quick journey through our voting rights and how we can find our ancestors through voting records!

Before I go, I feel I would be remiss if I didn’t provide one last resource. If you are eligible to vote in the United States, please vote!! In most states, there is still time to get your vote on. If you need more information on how to do this in your state, please check out Vote.org.

What about your ancestors? Where do you think you will find them in the voting records? What are you hoping to discover? Please let me know in the comments!