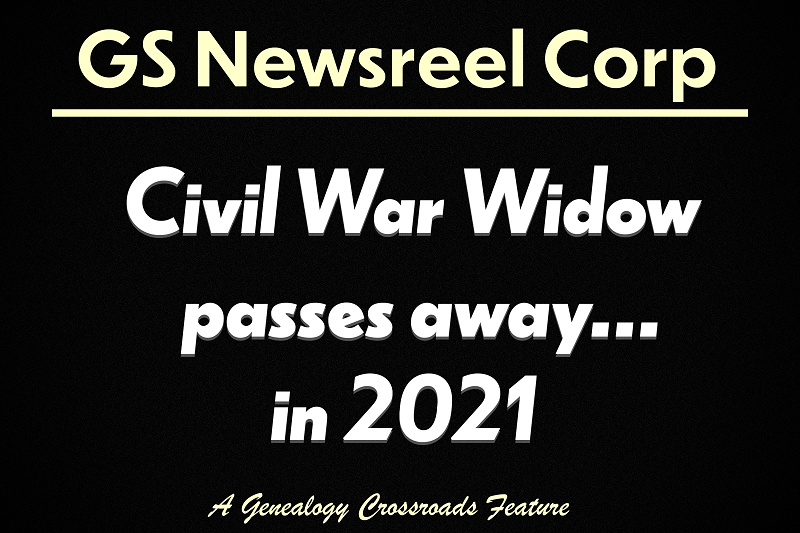 Welcome to the first Newsreel article!  This is a new feature for sharing quick genealogy news and updates. I know this isn’t (yet?) a short news film but it does include a video so close enough. 😄

After starting my family research I realized something that blew my mind: My grandmother was partially raised by/near her grandparents (not the mind-blowing part).  And her grandfather had served in the Civil War.  Though her grandparents passed away before I was born, I did know my grandmother before she passed away.  This meant that I knew someone who knew someone that was in the Civil War! A war fought 150 years ago was suddenly much closer at hand! 🤯

Which brings me to more recent news:  A 101-year old woman passed away this month, which is news in itself.  But more surprisingly, she was the last known (and plausible) Civil War widow.  Apparently, at the age of 17, Viola Jackson married 93-year-old former Union Soldier James Bolin.  She was his caretaker and he married her in part to pass on his service pension as a thank you for her care.  She never applied for the pension after his death, however. And there is talk of his children threatening her with exposure of her “sin” if she did apply.

Setting aside the unfortunate family drama, this makes my own connection pale in comparison.  It is an excellent reminder that the past is never as far away as it seems.  We may now have few if any living connections to the Civil War. But we don’t have to try too hard to make a connection similar to mine:  the people who knew people.  And to take it a step further, those who fought in the Civil War would have known the last of those who witnessed the American Revolution.  So we know people who knew people who fought in or survived the American Revolution.

Of course we could take this to its absurd extremes, but it is a powerful reminder that we are all connected.  Past, present, and future!

If you have found your own Civil War ancestors, you can order their service and pension records from the National Archives for a fee. Check out the NA’s site for Civil War Records. For any Confederate soldiers, note that the pensions were received from the state they served in. You’ll need to contact the state’s archive department for those.

New Season of Finding Your Roots

It’s back, baby!  The amazing and dapper Henry Louis Gates, Jr., and the team will be back with a new season of Finding Your Roots on Tuesday, January 19th.  Check out the preview:

Consult PBS for your local schedule.  If you, like me, have cut the cord, you can stream it live when it airs (click on the Live TV button in the upper corner).  For past episodes, you can find some online and all of them through then PBS Passport (which requires a monthly membership donation of $5+)

Are you as excited as I am for FYR’s return?  What connections to historic events have found in your research?  And what do you think about the Newsreel idea?  Please let me know below! Thanks!