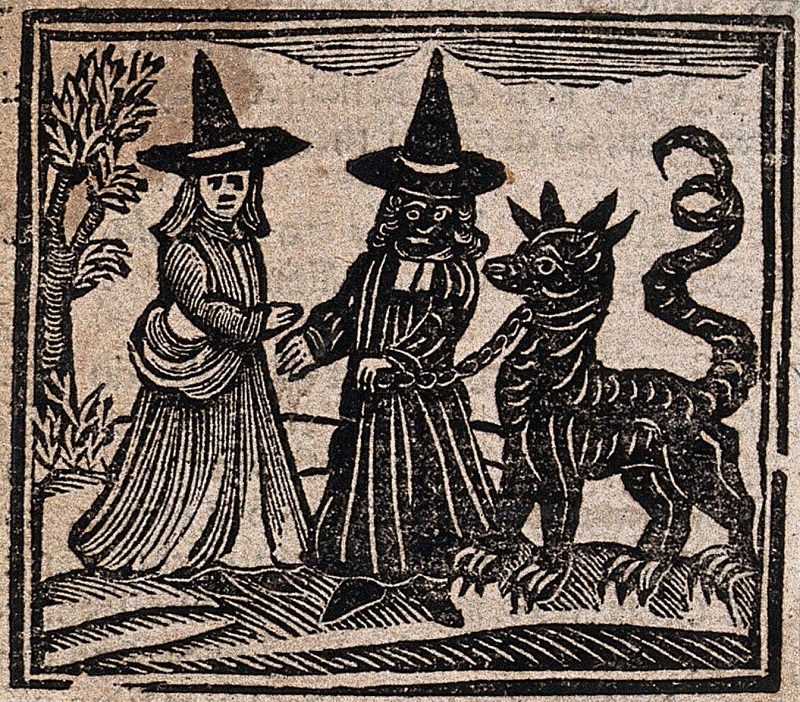 Who accused whom in the Salem Witch Trials? Friends? Foes? Perfect Strangers? As part of the October Salem Witch Project, I wanted to take a look at one of the most confounding parts of the trials: who accused their family, friends, and neighbors as witches?

There are entire books, theses, journal articles, and websites dedicated to this question, as well as the explanations for the accusations. To keep this to a (still rather long) blog length, I wanted to focus on my putative ancestor and executed witch Samuel Wardwell.

Who accused him? What did they accuse him of? Did he accuse others? Many people managed to be both accused and accuser. He was also not the only member of his household to be accused. His wife, eldest daughter, and step-daughter were accused of various witchcraft activities. All three women survived, released after the panic started to recede and cooler heads prevailed.

Now, let’s dive into the investigation!

Who Accused Samuel? And For What?

Unfortunately, we don’t know who originally accused Samuel–his arrest warrant is missing. This means that we also don’t know who his accuser(s) were. Looking at the documents that did survive may hold some clues.

We know that Samuel was examined (interrogated) and gave a confession on September 1, 1692. In his confession he admitted to covenanting with the devil, telling fortunes, and afflicting several young women: Mary Lilly and Hannah Taylor of “Redding” [Reading] and Martha Sprague. He was then imprisoned.

There is a good chance teenager Martha Sprague was an original accuser. She was one of the more prolific Andover accusers–each town seems to have had their core group of finger-pointers. Martha, along with two friends, gave testimony against Samuel. Her testimony relied on spectral evidence and her own unprovable claims. This was her pattern throughout the trials. It is unclear if she was the only accuser or if the other girls he claimed to afflict also also accused him. Perhaps he mentioned them for other reasons?

On September 13, at his trial or “grand inquest,” his confession was read out. Samuel shockingly stated that yes, he had made the confession, but that he had lied! He was not, in fact, a witch. Very clearly he stated that, confession or no, he expected to be executed :

“He: knew he should dye for it: whether: he ownd it or no”

From the notes added to the Examination of Samuel Wardwell, September 13, 1692

Why did Samuel feel this way? Only he knows for sure, but his statement offers a clue.

Up to this point, a very consistent pattern of convictions had been seen. If you confessed, you lived – though you may remain in prison. If you claimed innocence and went to trial, you were sentenced to death. By this point, everyone knew the “rules.” Thus, all four Wardwells likely confessed out of self preservation.

However, between Samuel’s confession and his trial, the court’s MO changed. Starting with the mid-September trials, they began convicting and sentencing to death confessed witches, including Ann Foster, Mary Lacey Sr, Rebecca Eames, and Abigail Hobbs. Where Samuel’s case fell in the order of these trials is uncertain. But we can assume that at least one or two had gone before him.

His comment about dying either way indicates that he was aware of the change in the trials and had concluded he was doomed regardless. Better to go to the grave in the good graces of your Savior than those of a court determined to execute you.

But what he couldn’t know was that, for reasons not clear to us now, none of the other convicted confessed witches would go to the gallows on September 22. Or at any point in the future.

Would the others have eventually been executed? It’s hard to say. I feel like the court hesitated, unsure about this break in precedence. And then–finally!–the government stepped in and started the long process of dismantling the chaos. In the end, Samuel’s moment of conscience may have been what killed him.

The Testimonies Against Samuel

Sadly, the trial record itself is missing. What we do have are the witness testimonies (depositions) used against him during his trial. We’re not sure if this is a complete list, since so many of his other documents are missing.

The depositions of these three young ladies were taken together and recorded on one sheet. As mentioned above, Martha was one of the regular Andover accusers. Martha, aged 16, was directly mentioned by Samuel in his “confession” as his victim. This is why she is often considered the most likely accuser. She is also the only one of Samuel’s supposed “afflicted” victims to testify (or at least whose testimony survives).

It is Martha’s affliction that results in one of two indictments against Samuel. She claimed that his specter pinched her, stuck her with pins, and struck her down, both before and during the examination. Martha also claimed that Samuel afflicted Rose Foster and Rose’s mother.

Mary Warren and Mary Wolcott were actually Salem accusers on the move. The Marys basically just backed up Martha, agreeing that Martha “verily believes” that Samuel is a “wizzard” and that he afflicted her. Warren did not put forth any additional information or accusations. But Wolcott claimed that Samuel’s apparition pulled Martha off of her horse near Salem. While not large contributions, their testimony had long been believed in other trials. Here again it apparently held weight with the judges.

A constable of Andover, 41-year-old Joseph was an extended relative of Samuel. Joseph’s brother John was married to Rebecca Hooper, Samuel’s wife’s sister. In fact, after Samuel’s execution, Samuel Jr. was placed with “Uncle John Ballard.” Joseph’s testimony is a little circular, but seems to be equal parts supporting and condemning Samuel. He did not believe Samuel had anything to do with his wife’s death (below), however he did seem to believe that Samuel had some sort of genuine fortune telling powers. This is supported by the backstory of who he did blame for the loss of his wife:

That year, Joseph’s wife Elizabeth had been suffering from a long illness and no cause could be found. Apparently, around the same time, Samuel was becoming concerned about his reputation. He told John that he was worried his fortune-telling habit could be used against him and he may even be blamed for Elizabeth’s illness. John then expressed Samuel’s concerns to Joseph.

Joseph, perhaps inspired by this conversation, had two unnamed afflicted girls of Salem come over and see if they could sense witchcraft upon his wife. They said they could and shortly thereafter Joseph filed complaints about Mary Lacey Sr. and Jr. (mother and daughter). The Laceys thankfully survived.

Abigail, a 16-year old Salem girl and accusation veteran, who, in her written deposition, claimed that “last winter” Samuel was visiting her father with another man, John Farnom [Farnum}. John asked Samuel for his fortune. He predicted that John was in love with a girl but she would “cross” him and leave him. Samuel also predicted that John would be shot and fall from his horse. All of this apparently came true.

Then Abigail recalled another incident where Samuel stated that a James [Jeam] Bridges had loved a girl when he was 14. This was true but James had never “spake of it.” His father had stated that he heard “Jeam say I wonder how wardwall [sic] cold [could] teell so true.” It appears James was present at Abigail’s deposition as his name is included on the deposition document.

“Said Wardwell further: told he had like to be shot with a gun and should have a fall off from his horse…”

Examined for witchcraft on the same day as Samuel, 14-year old William claimed that Samuel, his wife, and two daughters, along with Goody Johnson and Goody Parker were in “his company.” This seems to imply that they worked as a group against his/their victims, including Martha Sprague, Rose Foster, and Abigail Martin.

Ephraim was the father of Rose Foster, who was mentioned by Martha Sprague and William Barker, Jr, as one of Samuel’s other victims. However, Ephraim’s testimony didn’t accuse Samuel of harming his daughter. Rather, he spoke of Samuel’s fortune telling history.

It seems Samuel had once told Ephraim’s wife that she would have 5 girls before she had a son, “which thing is come to pass.” He also overheard Samuel tell Dorothy [Dority] Eames her fortune and later Dorothy said she believed Samuel was a witch, “or els[e] he co[u]ld never tell what he did.” He then described that Samuel was a palm-reader who always looked down at the ground before giving his predictions. Lastly, he stated Samuel had bragged that he could make “cattle come to him when he pleased.”

Thomas, aged 65, didn’t provide much testimony other than he had heard Samuel often tell “young people their fortune.” In his opinion, Samuel “was much addicted to it and made sport of it” but then “farther said not,” according to the recorder.

Of the people that Samuel supposedly afflicted, only Martha Sprague testified. Are we missing Mary and Hannah’s testimonies or did they not testify? Rose Foster also didn’t come forward nor did her father mention her being afflicted by Samuel. Rose was a major player in the trials, so maybe she was distracted? Interestingly, Hannah was later accused of afflicting Rose Foster but was found not guilty in 1693.

In the end, surviving documents show Samuel was indicted for afflicting Martha and covenanting with the Devil. The other girls are not mentioned, nor was he indicted directly for his fortune telling. We don’t have his conviction document but it is likely that he was convicted on both counts.

Did Samuel Accuse Anyone?

Then, as now, it wasn’t unusual to point fingers once you are accused of a “crime.” In the case of the witch trials, naming other witches could help prove you were one too. And, as discussed, being a confessed witch usually meant you didn’t die.

Samuel didn’t accuse anyone or mention any co-conspirators in his original confession. However, he did contribute to several trials after his own confession. On September 5, he attended two examinations: one for Mary Taylor and a combined one for Jane Lilly (relative to Mary Lilly?) and Mary Colson. All were women that he felt had ties to the destructive and deadly house fire that killed his brother-in-law William Hooper and destroyed William’s house.

In the end, all three women survived the trials. The truth of the Hooper house fire remains unknown.

A week after Samuel’s trial, he was executed on September 22, 1692, along with seven other innocent people. These were the last executions of the Salem Witch Trials.

You made it! This just touches the surface of Samuel’s experience. His family ties to Quakers (Puritans did not like Quakers) and other undesirables, as well as his personal history beyond the fortune telling also didn’t help his cause.

What I’ve learned in researching all of this was just how tightly intertwined everyone in the colony was. It was a gigantic, dysfunctional extended family trying to rub along during a period of extreme external and internal stress. And it all came to a head in a disastrous way.

What do you think? Do you feel the “afflicted” girls were genuinely afflicted, either by witchcraft or mass hysteria? How much of the trials involved people taking advantage of the situation to settle scores or otherwise find personal gain? Let me know below!

UPDATED Nov. 7 2021: Title updated to be the grammatically correct “Whom”. In my head, I kept hearing AC/DC’s “Who Made Who?” so this didn’t sound weird until I finally went to make the Pin! 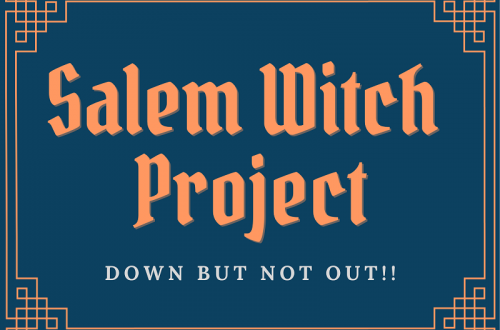 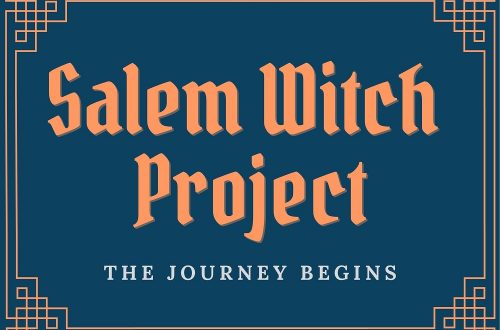