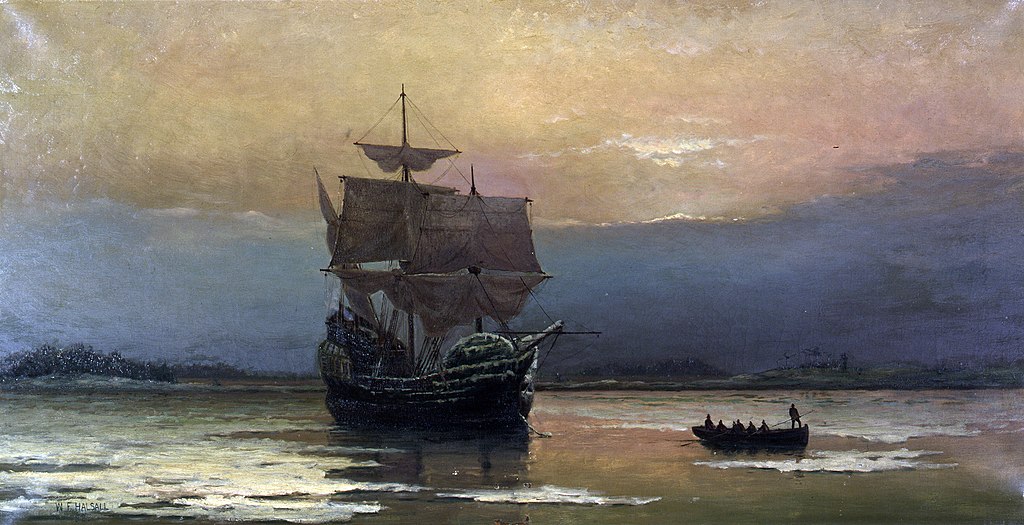 This year we celebrated the 400th anniversary of the Mayflower voyage. While this milestone wasn’t the biggest news of the year (😐), it is still important to history. And to the large number of us with colonial ancestors!

Since we are all busy this holiday season, I want to focus on some of the new resources released with the anniversary. And for good measure, some additional places to look to find your Mayflower ancestry.

400 years ago, the Mayflower landed at Plymouth (Plimouth), setting into motion centuries of myth and legend. While the story we were taught as children is straightforward and sanitized, it left out a lot of hard reality. Thankfully we are now starting to look at all the aspects of the Mayflower. This includes the historical context of the New England region and the reality of the relationships between all of the peoples, both indigenous and European.

For a relatively quick primer on the expanded and inclusive examination of the Mayflower, check out this documentary. Be forewarned: it is 50 minutes, but it gives pre-voyage context and a look at what is being done now to tell the entire story.

This major anniversary is being celebrated not just here in the U.S. but also in the UK and the Netherlands. Websites have been set up to examine the Mayflower’s legacy, one for each major country in the story:

The UK (the best and most useful of the websites)
The USA (the most commercial of the websites, sadly)
The Netherlands (where the Puritans lived in exile before deciding to relocate to the American colonies)

Unfortunately, there isn’t a formal associated anniversary website for the Native nations. The British has the better page dedicated to Wampanoag history.

Thankfully, the importance of the Mayflower to the mythology of the United States has resulted in a large amount of existing research. The trick is getting your family tree back far enough to connect with that information!

Not all of the passengers managed to procreate or have surviving offspring. Below is a list of those known to have created New World families. This list includes the women who bore the children as well, so it is a bit longer than some of the standard lists.

Recognize any names from your tree? I have the family names but not yet any direct branches. Maybe someday!

For a full list of passengers, whether or not they successfully went forth and multiplied, check out this site.

There are a number of societies and groups for the European Mayflower descendants. Here are a few to get you started. Alas, most resources have subscription or membership fees ($$). Check with your local library for access to some of the databases to help save some money.

For a lot of us, physical resources are a little hard to get our hands on right now. But once we can move about freely again, there are some options that have yet to be digitized:

“The Silver Books” by Bruce Campbell MacGunnigle. Printed by the Mayflower Society, these are detailed histories of the folks listed above. They include about 5 generations of descent, so if you can get within roughly 100 years or so of 1620, you may find a gold mine. You can buy them from the Society or hopefully find them at your local library.

Speaking of, your local library–especially if they have a genealogy center or section–may have a number of publications for you to get your research on!

If you know of a specific book title, check WorldCat to find a copy near(ish) to you. Most libraries offer interlibrary loans if it is several states away. And don’t forget Google Books and Archive.org for digitized public domain books.

There are also a number of general history books that explore the Mayflower, Plymouth, their history, and the impact of the settlers. Some of the newer ones include:

Please note that each of these books has a different perspective and aim. Check out the description and reviews to best meet your interests.

If you have or suspect you have Wampanoag or other regional tribal ancestry, we’re finally starting see some resources available for your research as well. A good place to start is with the American Ancestors’ Native Nations of New England page. It includes tribal information, available records, historical resources, and more to begin or expand your research.

Before We Sail On

Do you have any Mayflower connections? If so, what do you know of them? As we widen our view of the history of the Mayflower, has your opinion of this connection changed in anyway? Let me know below!

Personally, I have found ancestors going back to at least 1630. This fills me with tremendous pride–good job on surviving, peeps! But also with a sense of responsibility to understand their history and how it has shaped–for better and worse–the America we have today.

Thank you for following along on this quick resource overview of the Mayflower! Stay tuned for a more seasonally appropriate article soon!*

* Author’s Note: Apologies for the Thanksgiving after Christmas theme. I fell afoul of the plague and am at last recovered. This was already drafted and I wanted to release it in the actual anniversary year. Thank you for humoring me! 🙂